You are at:Home»Entertainment»A different view of Bonang Matheba’s book “From A to B”

Famous TV and radio star Bonang “Queen B” Matheba held a relaunch of her book Bonang From A to B, on 14 Sep 2017, Thursday night during an intimate book signing at the Mall of Africa in Johannesburg. This comes as a result of the book was recalled at all exclusive book stores due to era’s in her book.

This comes after the first edition was recalled because of grammatical and factual errors. At the same time Bonang’s former Friend, Somizi, and her ex-boyfriend, Euphonik, sent legal letters demanding that their names and any references to them in the book be removed. In the initial version Bonang said she stopped being friend with Somizi because he became friends with her ex, who she claims assaulted her.

We are Glad to see the relaunch of Bonang Matheba’s “A to B” book after few errors in the first copies that came out forced its removal from the shelves to allow for corrections. 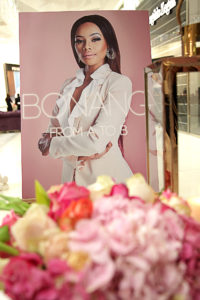 Refilwe Pitjeng shared her take on the Bonang’s first edition of “A to B” book  and this is what she had to say “I found the initial parts of the book to be clumsily written, with too much repetition which became quite annoying and distracting. Here Matheba focuses on the theme of love; how her family always made her feel wanted and supported. But the tone of first three chapters did not invite me to have a conversation with her, to be part of her life, as I had hoped”.

she adds that ” It is only from chapter 4 that she finally came alive for me. I began to see and hear Bonang. She wrote as she would speak. In chapter 4 she talks about her first big TV gig, the music show Live. She says “As Livewent live, so did my name… Those words may as well have been to me, to welcome myself in the biggest stage of my life at the moment.” I couldn’t help but hear her deep and bubbly voice as I read those lines.

Pitjeng says In the rest of Bonang’s  book her love and passion for her career come alive and I liked that she continually attributed her success to her mother. Every chapter contains a lesson that she learnt from her mother. A strong quote from her mother that spoke to me was “You are the product of the five people you spend the most time with.”

In her conclusion Pitjeng states  “Her book focuses on the value of planning and following through. This is clear in her five-year strategy in which every five years she sits down with her mother and reviews her plans. So, if you want to get from A to B, plan your life, your goals and your dreams. Yes, things may not always go the way we want them to at the time, but trust yourself and surround yourself with strong, positive people.” – Original review by Refilwe Pitjeng