Zimbabwean artist William Mayere sells 3D paintings on Vincent Road in East London. 30 year old Mayere has been in South Africa for eight years. He came to East London following his two brothers who were already here. The three of them share a room in Southernwood. 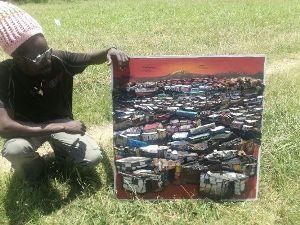 When Mayere arrived, his brothers were selling headboards and chairs made out of bamboo which they cut in the bush. He joined them and worked on this until four years ago when a friend from Zimbabwe taught him how to make these paintings.

Mayere collects soft drink cans and other materials such as wire and cardboard to use in his paintings which he says are inspired by the way of life in informal settlements. “I have never stayed in Duncan Village but the way people stay in those interests me and most of my paintings are of such areas,” said Mayere.

He showed GroundUp two of his favourite paintings which he says shows to what lengths people in informal settlements must go in order to live.Another painting shows the divide between the rich and the poor. It shows an informal settlement and a suburban area divided by railway lines. 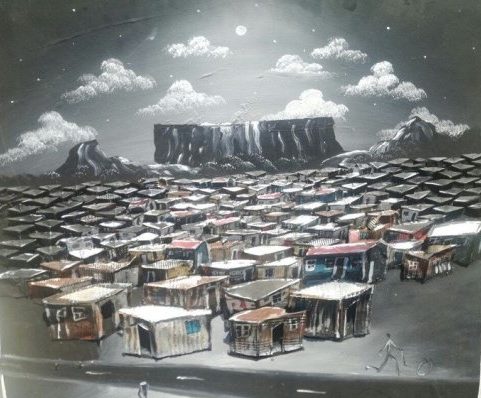 All the paintings use cans and paint to show the overcrowding in informal settlements and the way in which structures are built. It takes Mayere two days to finish one painting which he sells from R500 to R2 000 depending on the size. While he is busy painting his younger brother sells the works.

While GroundUp was talking to him, several motorists stopped to admire the paintings with the promise of coming back to purchase. Others placed orders for work they wanted Mayere to do for them.