You are at:Home»Bloggers»Great supermarkets rip-offs

· Which? has launched ‘super-complaint’ into pricing tactics of some stores
· About 40 per cent of grocery purchases sold under some kind of promotion
· Watchdog said some offers do not stand up and shoppers face losing out

Supermarkets face an investigation into claims shoppers are ‘losing hundreds of millions of pounds’ after being duped by bogus bargains, misleading labels and sneak price rises.

Which? has used its legal powers to launch a so-called super-complaint into the pricing tactics of big stores such as Tesco, Asda, Sainsbury’s and Morrisons.

The move will trigger an investigation by the Competition & Markets Authority, which could lead to new laws into the way prices and offers are presented.

Scroll down for video 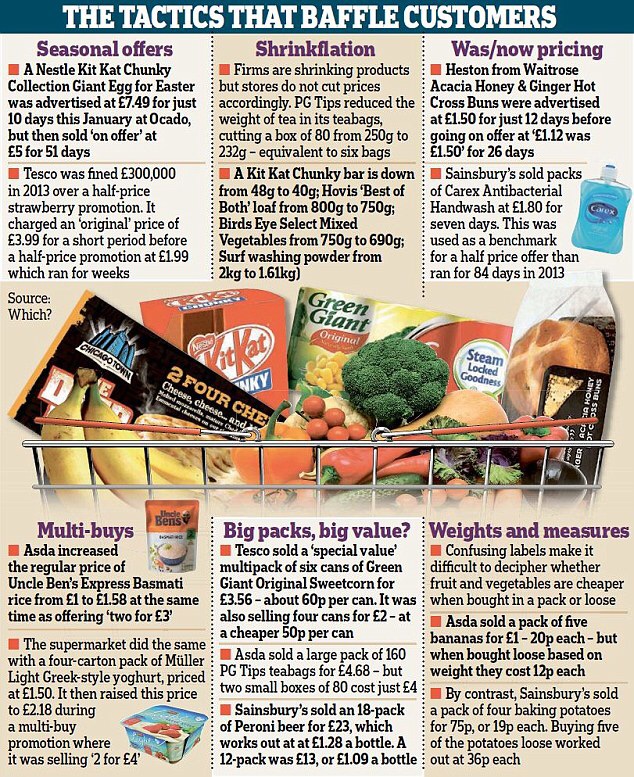 It could result in a new legal regime and big fines for supermarkets that mislead customers.

Which? said: ‘We have consistently identified a range of misleading and confusing pricing tactics – such as dodgy multi-buys, shrinking products and baffling sales offers – that exaggerate discounts.

‘Many retailers are creating the illusion of savings that don’t exist and are manipulating consumer spending by misleading people into choosing products they may not have chosen if they knew the full facts.’

Some 40 per cent of grocery purchases are sold under some kind of promotion, suggesting that shoppers are wooed by claims of big savings.

However, Which? said many of these offers do not stand up to scrutiny, with the result that ‘consumers could be collectively losing out to the tune of hundreds of millions of pounds’.

The main issue is confusing special offers, which are not the bargain they appear.

Which? gave the example of a Nestle Kit Kat Chunky Collection Giant Easter Egg, which was advertised at £7.49 for just ten days in January at Ocado, but was then sold ‘on offer’ at £5 for 51 days.

Guidelines suggest a product should have been at the original higher price for a ‘reasonable’ period before being reduced.

Generally, the reasonable period is considered to be 28 days, however supermarkets argue it is much shorter than this when you are dealing with food, particularly fresh, seasonal produce.

In theory, supermarkets are barred from misleading shoppers about the price of a product, or how the price is calculated, under the Consumer Protection from Unfair Trading Regulations Act 2008. But this is a grey area and the law is rarely enforced. 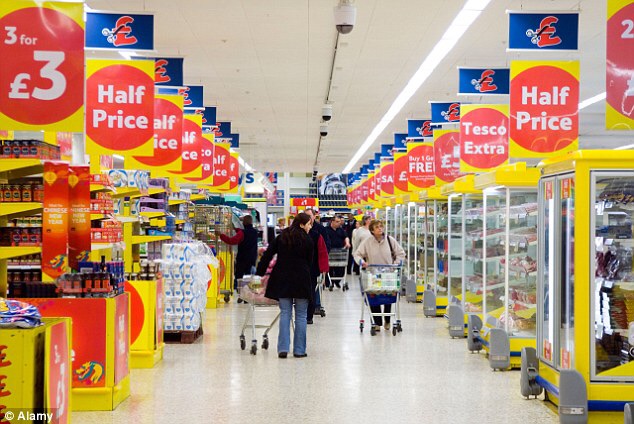 Which? has used its legal powers to launch a ‘super-complaint’ into the pricing tactics of big supermarkets such as Tesco, Asda, Sainsbury’s and Morrisons over fears customers are being misled These brands have been guilty of shrinkflation (related)

The consumer group said Asda increased the price of a Chicago Town Four Cheese Pizza two-pack from £1.50 to £2 when it went was sold as a multi-buy at two for £3. Meanwhile, Tesco sold a multi-pack of six cans of Green Giant Original Sweetcorn for £3.56, describing it as ‘special value’. In fact, the cans were cheaper when bought as a pack of four for £2.

Which? said the way supermarkets sell many products, particularly fruit and vegetables, is confusing. Generally, fresh produce is cheaper if bought loose by weight, rather than in a pack, but this is not always true.

“Many retailers are creating the illusion of savings that don’t exist and are manipulating consumer spending by misleading people
Which?”

Which? has also identified an epidemic of ‘shrinkflation’ where big-brand products are reduced in size without a corresponding cut in price.

Which? said: ‘The cumulative impact of all these different pricing tactics means it is virtually impossible for people to know if they are getting a fair deal. This is particularly true when prices vary frequently, when consumers are in a rush or they are buying numerous items of relatively low value.’

Its executive director, Richard Lloyd, added: ‘We’re saying enough is enough and using one of the most powerful legal weapons in our armoury to act on behalf of consumers.’

The British Retail Consortium, which speaks for supermarkets, rejected the Which? criticism. The group’s director of business and regulation, Tom Ironside, said: ‘We do not accept the core implications set out in this super-complaint.

‘The examples set out are very specific in nature and are not in any way indicative of broader systemic problems.

‘Major supermarkets have worked with Government and public bodies to make pricing clearer and simpler for customers, such as improving the way unit price is displayed.’