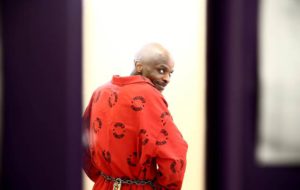 Photo: www.timeslive.co.za
Ananias Mathe after he tried to break out of C-Max in Oct 2016

Ananias Mathe, of Mozambican origin, was found guilty on 64 of 71 charges including rape, attempted rape, attempted murder, robbery and theft and was sentenced to 54 years imprisonment with a minimum of 43 years. He had achieved further notoriety in 2006 by being the only person to have ever escaped from the maximum high-security c-max Penitentiary in Pretoria, South Africa. Mathe

A senior prisons official in KwaZulu-Natal confirmed to TMGDigital that the convicted rapist‚ murderer and house robber was suffering complications from an apparent “digestive issue” over the past three months. At between 4.30pm and 5.pm on Tuesday‚ the Mozambican national died in the King Edward VIII Hospital.

At first suspicious‚ officials thought that Mathe was trying to get to hospital as part of an elaborate escape plot‚ especially since he has twice tried to break out of the ultra-secure C-Max prison in Kokstad where he was being held and had been part of several audacious escapes from other facilities across South Africa.

Mathe’s health had deteriorated. He was taken for further medical attention in mid-December‚ this time at the Edendale Hospital in Pietermaritzburg. There he underwent surgery and was‚ again‚ taken back to Kokstad. Then‚ three days ago‚ on Christmas Eve‚ he was again admitted. Because of security fears‚ he was transported to Durban.

The prisons official said “He was there for three days‚ listed as critical. He was operated on twice for the same problem‚ to do with things not being well in his stomach. It seems like a digestive issue‚ but I wouldn’t know 100%‚ medically-speaking. We are waiting for an autopsy.”

At this stage foul play is not suspected.