You are at:Home»Current Affairs»Politics»Women in South Korea demanding access to Abortion

Abortion is illegal in South Korea. But women are demanding change, and more than 235,000 have signed a petition, posted by a netizen on September 30 on the presidential office website, that calls for the government to legalize abortion, including by providing access to mifepristone, an abortion-inducing drug available in many countries around the world.

This petition mechanism demonstrates a new level of access and participation in South Korea’s government. The way it works is the government allows members of the public to post a petition on its website for 30 days. In August, the new government of president Moon Jae-in reiterated its commitment by pledging to formally respond within 30 days to any petition that gathers more than 200,000 signatures.

By the end of October, when the one-month period was up, the petition had successfully gathered over 235,000 signatures, well over the number required. This is the only second petition to pass that mark since Moon Jae-In became president in May 2017. 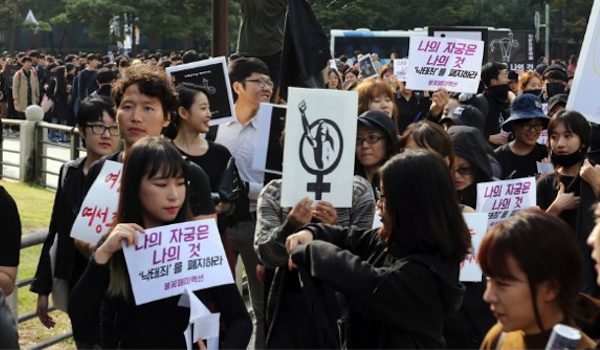 So now the women of South Korea are waiting for an answer. To comply with its pledge, the government needs to respond by November 29.

Today in South Korea, women may only legally obtain an abortion in highly restricted circumstances. An abortion is possible in cases of rape or incest, if the parents cannot marry legally, if continuation of the pregnancy is likely to jeopardize the pregnant woman’s health, or when the pregnant woman or her spouse has one of a limited number of designated hereditary disorders or communicable diseases. Women who are married must have their spouse’s permission to obtain an abortion, and any abortion, regardless of motivation or context, is prohibited after 24 weeks of pregnancy.

Current South Korean law subjects a woman who has an illegal abortion to up to one year of imprisonment or fines up to 2 million won (US $1820). Healthcare workers who provide abortions face punishments of up to two years in prison.

Despite these restrictions, abortion is widely available in South Korea, and prosecutions for abortion are rare. But in recent years there has been growing tension over the issue, and abortion foes have pushed for tougher enforcement of the law.

Abortion is still a sensitive issue in South Korea, which struggles with the consequences of a falling birth rate and rapidly aging population. But criminalizing abortion is neither an effective nor a legal means to increase the birth rate. Research around the world shows that when governments restrict abortion, women still have abortions — they just have more dangerous ones. According to the UN, in 2011 the average unsafe abortion rate was more than four times greater in countries with restrictive abortion policies than in countries with liberal abortion policies.